THE ARTIST, THE CLIENT AND THEIR ART

There are at least three times as many tattoo parlors in Tucson, Arizona as there are do-nut shops! And there are many people sporting tattoos…some show and some do not. It’s a private thing. But like them or not, it is a growing art form which is often thought of as a ‘counter culture.’

Few people are as proud as those who sport body art. The more ink on their bodies the more likely they are to flaunt their art and to pose for anyone with a camera. Body Art expresses who people think they are. It gives them an inner self-expression as well as freedom, and sets them apart from those without body art. It creates a unique marking that helps to define a person. It is a part of our American Culture that continues to thrive.

Tattooing has come a long way since ancient times, Tattoos covering most of the body is called a body suit. This form of tattooing was started years ago in Japan where the art form was popular with the Japanese mafia and was considered a negative. At one time, Japan had a museum that displayed the hides of deceased people with such body suits. Families were well rewarded for donating their loved ones bodies.

In the 1990’s tattooing gradually began inching its way into acceptable society. The art of tattooing did not come into its own in America until the first part of the 20th Century in NYC. These tattoo parlors were mostly underground thus creating a counter culture.

Society, generally, does and will continue to discriminate against visible tattoos. There is even an expression called, Executive Tattoos, which are not visible on people in their work attire. Many employers do not hire workers with tattoos showing, although this may change as more young people get tattooed which would be a boost to the industry. An increasing number of women are getting tattoos as well as becoming tattoo artists.

The Tattoo artists are perhaps the most fascinating people of all. Their art is amazing and complicated. Many of them can copy a photograph of a loved one on an arm or a leg. Since 1976 when the first National Tattoo Convention was held in Houston, Texas, they have spread throughout the country, now giving the artist more exposure and freedom as well as chances to meet their competition. Thus, well known artists were created.

These candid photographs were taken during the Tucson Tattoo Expos in 2010 and 2011. Bringing a small group of photographs to the attention of non-tattooed people will perhaps, close the gap and help to further understand and appreciate another art form that is a part of America’s many cultures. 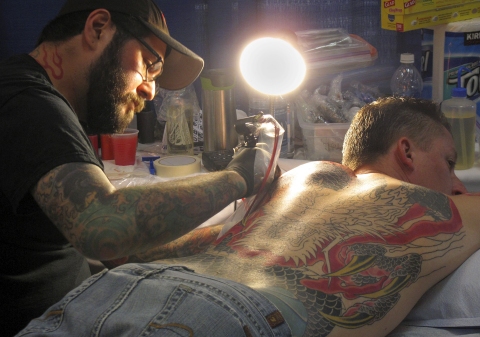